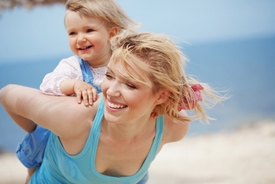 So many people have benefited from LASIK eye surgery worldwide. The surgery can make a great difference in people’s lives, reducing their dependency on corrective lenses such as contacts and eye glasses. Since the surgery is quite safe and technology has advanced a great deal since the procedure was invented, there are many people who qualify for this particular kind of surgery.

What surprises some patients is that women who are pregnant or nursing are not considered good candidates for LASIK. We’d like to take a few moments right now to explain why that is the case.

How and Why LASIK Is Performed

It’s helpful to first explain what LASIK is and why it is performed. LASIK is a laser surgery that reshapes the cornea, which is the clear, frontal portion of the eye. To do this reshaping, a small flap is first created in the topmost layer of the cornea.

By reshaping the cornea, LASIK is able to treat the following issues which are known as refractive errors:

Why Pregnant Women Are Not Candidates for LASIK

When a woman is pregnant, hormonal changes occur. The effects of these changes include hair growth, weight gain, and changes in vision. Because the vision of a woman can change when pregnant, it’s best for LASIK surgeons to wait until after pregnancy to perform LASIK. Doing this ensures optimal results.

In addition to the above, eye drops and anesthetic are administered as part of the surgery. While these are both safe for adults, there is a chance of these substances affecting a developing fetus. In order to prevent birth complications or defects, it’s important for surgeons to wait to perform LASIK until after the pregnancy.

Why Breastfeeding Women Are Also Not Candidates for LASIK

Similar concerns regarding IntraLase LASIK apply for women who are breastfeeding. The medications and anesthetic will show up in a woman’s breast milk, and we’d rather not chance any health issues with a newborn who is feeding on this breast milk.

When will pregnant/breastfeeding women be able to undergo LASIK?

In general, a LASIK surgeon will wait until two menstrual cycles after pregnancy to consider performing LASIK on a patient. This can vary to some degree, so it’ll be determined on a personal basis.

Alternatives to LASIK During Pregnancy/Breastfeeding

While pregnant or nursing, the best option for vision correction is glasses and contacts. This is just to play it safe, allowing patients to see clearly without potentially harming their child or affecting their chances of receiving optimal vision correction. We can assist you in choosing the best corrective lenses during the consultation process.

For more information about laser eye surgery and how you can benefit from state-of-the-art eye care treatments, be sure to contact our Jacksonville LASIK eye surgery center today. The entire team here looks forward to meeting you in person and helping you make the best possible decisions regarding your eye health and wellness.

At Maida Custom Vision, we’re passionate about enhancing the vision of those in our community. Athletes at every level, from…

Begin Your Journey to Better Vision With LASIK

Dr. Amit Chokshi explains what sets Maida Custom Vision apart from other LASIK providers and why more patients are choosing…

We're excited to welcome Dr. Christian Guier to Maida Custom Vision. Dr. Guier is here to guide our patients through…

Our Blog
Copyright © 2004 - 2022 MAIDA Custom Vision, All Rights Reserved. Powered by Connect
Back To Top